When the Marymont Technology Park in San Antonio, TX was built, it had a loadmaster-style composite roof deck in place. It’s a value-oriented way to cover a huge area without sacrificing structural stability. Unfortunately, composite decks don’t last forever, and when it comes time to re-roof it often means a full (expensive) roof deck replacement is necessary because composite roofs are rarely (if ever) suitable for a recover.

The reason why is that composite roofs are usually not designed to hold fasteners, which presents problems with consistency and reliability when trying to attach a new roof system on top of the existing roof. So, the vast majority of composite decks are simply not viable for mechanically attached recover options. Similarly, the surface of the existing roof in many cases may be unsuitable for new adhesives to be effective. The laminated “sandwich-style” composition of the deck also means it is easily damaged in trying to remove membranes or other outer roofing layers, which means tearing off the existing roof can lead to structural concerns.

For Marymont Technology Park, a complete roof and deck replacement would have been an extremely costly scenario for their 88,934-square feet of roof. Fortunately, the building owner was working with a knowledgeable contractor, Absolute Roofing in Austin, TX as well as with Jay Rodriguez at Market Makers, the local Versico Representatives in the area. This professional team was familiar with the capabilities of the V2T/Vacuseal roof system and its applications in laminate deck recovers. By utilizing V2T it allowed for an installation that could be placed over the existing roof without compromising the existing structure. Since there are no direct attachments to the existing roof or roof deck point-loading is not an issue for the V2T system. Also, because V2T doesn’t rely on traditional attachments, and is loose laid and vacuum sealed, it installs right over the top of the existing deck, without compromising any structural integrity and without risking improper adhesion in any area. 93 V2T vents, combined with Versico 60ml TPO membrane resurfaced the roof at a significantly lower cost, faster timeline, and significantly less disruption to the occupied building than a deck replacement.

The savings with V2T versus replacing the entire roof deck was approximately $900,000. Even more impressive was the additional cost savings attributable to time. The V2T system required only about 30% of the time of a complete replacement, a tremendous reduction in labor hours.

Replacing the roof deck would have involved tearing off everything above the occupied offices, replacing deck and roof in a given area would have been nearly impossible on a daily basis, likely leaving the building unprotected at times during the process. By utilizing V2T these concerns were eliminated. 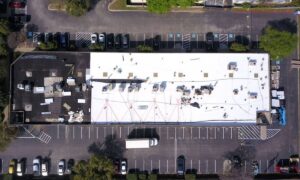 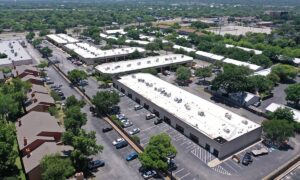 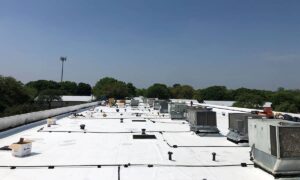 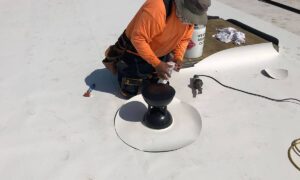