The V2T Roof System is different from existing roof vent devices because it uses the Venturi principle to capture the dynamic flow of air across the roof’s surface to generate low pressure. The vent works with the effects of the wind instead of against it.
9

The big difference between V2T Roof System and other roof systems!

The V2T Roof System is different from existing roof vent devices because it uses the Venturi principle to capture the dynamic flow of air across the roof’s surface to generate low pressure.

The vent works with the effects of the wind instead of against it.

V2T uses the power of the wind to hold the roof securely in place. The science behind the V2T vent is based on a recognized physics principle that creates a vacuum that becomes stronger as the wind speed increases.

The unique design of the V2T vent uses the wind speed to create a vacuum under the roofing membrane, holding it to the substrate more tightly as the wind increases (Bernoulli’s Law).

The reality is, destructive uplift pressures are counteracted by a greater vacuum force created by the vent.

How did this roof system come about?

When a group of engineers saw the wear that high winds put on roofs, they wanted to do something about it. They developed a technology that uses the pressure created by the wind to create suction between the membrane and the substrate – the stronger the wind blows, the tighter the roof holds. After completing their design, the system was validated at their alma mater, Virginia Tech, and later V2T System was subjected to the wind tunnel tests by NASA, and the Underwriters Laboratory.

To establish performance parameters of this breakthrough technology, a prototype of the V2T Technology was tested in the high speed wind tunnel at Virginia Tech with documented wind speeds of 150 mph.

In addition to the Virginia Tech tests, the vent system has been validated and successfully tested at UL at 195 lbs/SF (max certification), the NASA wind tunnel in Langley at 72 mph. As a reference point, an industry standard warranty covers a roof for wind speed of 56 mph and gale force winds up to 72 mph, which V2T’s more than doubled.

The V2T roof system takes advantage of the aerodynamic flow which existing vent systems are not able to do. Based on the Venturi principle, V2T accelerates air through the gap in the vent, allowing for a suction to occur under the membrane, which is stronger than the force of the uplift being exerted on the top side. Traditional existing vent systems at best equalize the pressure which still allows for greater wear on the roof system components.

Get Started with V2T
9

V2T was also tested at a NASA facility at Langley Air Force Base, the Insurance Institute for Business & Home Safety (IBHS) and the Underwriters Laboratory (UL Certified), among others, and has been tested to withstand wind speeds of up to 150 MPH.

FM Global:
V2T installations typically achieve a safety factor ranging from 2.5 to above 6 and can be designed for coastal regions to meet and exceed any required safety factors. This surpasses the required FM Global safety factor of 2. However, FM Approvals does not test the V2T Roof System because they only test fully adhered and mechanically attached roofs.

Insurance Institute for Business & Home Safety (IBHS):
Testing was completed at the IBHS testing facility in South Carolina. V2T was installed and tested in their open jet wind tunnel with speeds up to 140 mph. Wind generation is produced by 105 (350 horsepower) vane axial fans independently controlled to produce real world open country flow and turbulence conditions. The results proved the power of the vent to hold the membrane in place in hurricane force winds. 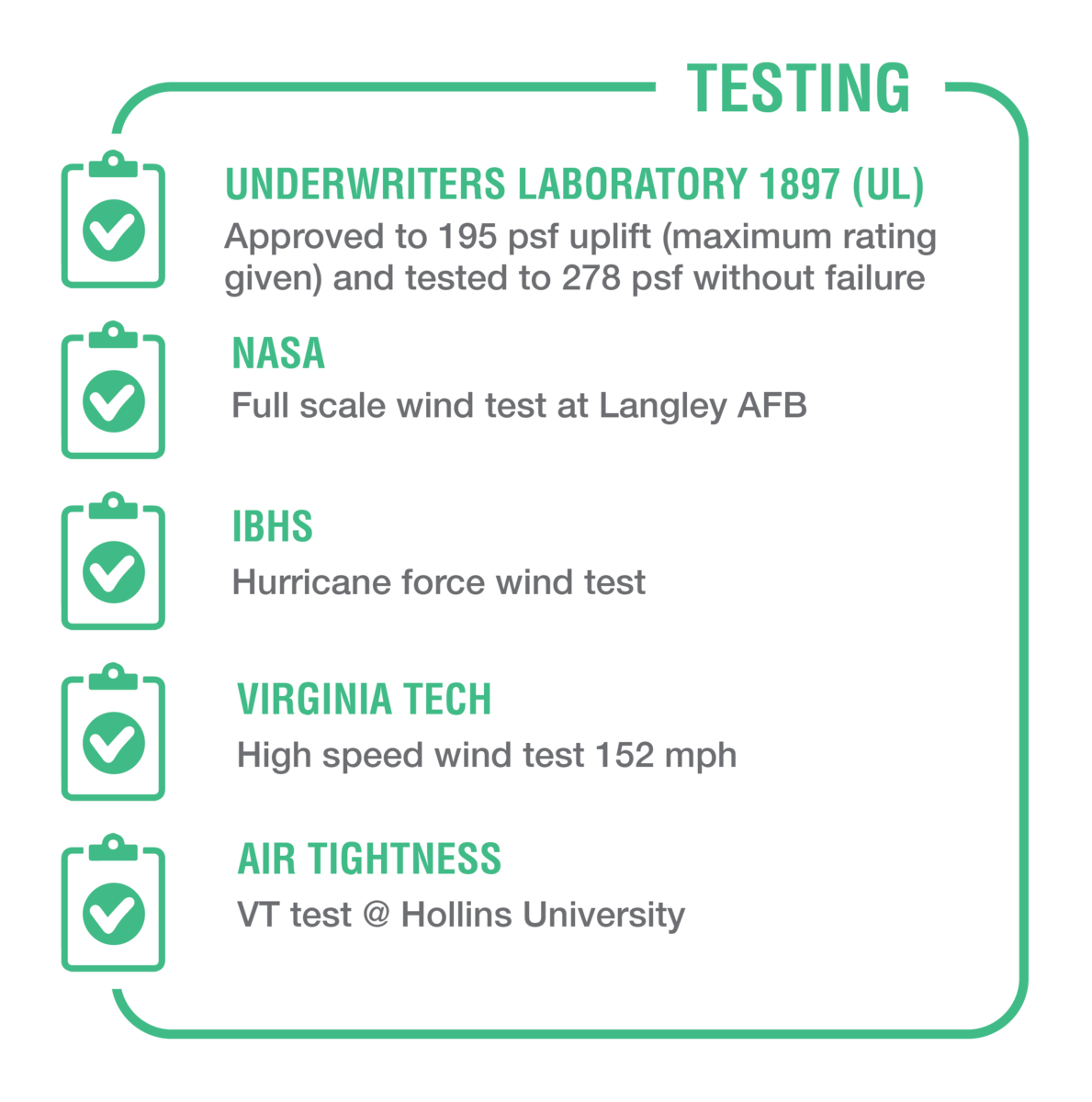