V2T vs. the Alternatives

Because the V2T Roof System was designed to use physics and the power of the wind to hold it in place, it simply doesn’t require the large amount of fasteners, ballast, and adhesives in use by typical fully adhered or mechanically fastened roofs.
There are very few low slope vent systems available in the marketplace today. So, we are frequently asked about the differences between the V2T Roof System and the Kelly 2001 system. Here is a summary of the 5 key differences between the two technologies.
View the Full PDF Report 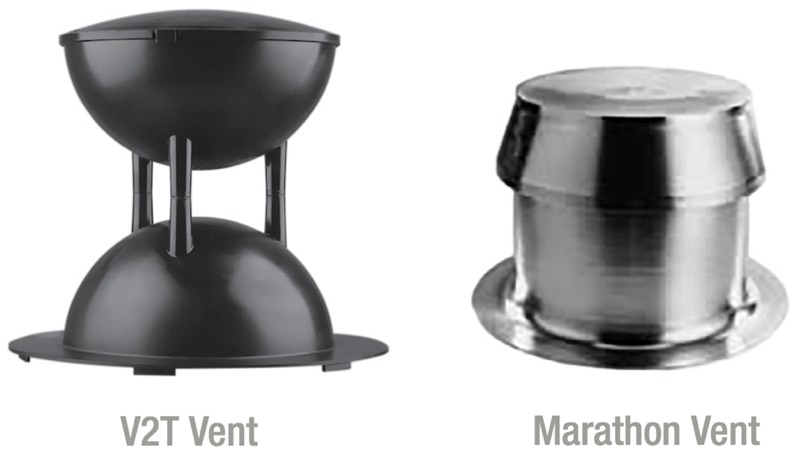 The second difference is the positioning and principles of operation of the two systems. Because Kelly system is designed to operate in the negative zone, the vents are best positioned on the perimeter edge. However, that makes the vents on the non-windward side far less effective, and potentially non-operational.Because the V2T Vent Technology is engineered to be positioned in the interior of the roof, all vents on the roof are operational, which on average, presents a 400% increase in the functional vents on any given roof when using V2T.

The Kelly System has requirements of securing the perimeter edge and penetrations with OSB board attached to the deck and adhering the membrane to the OSB board. The V2T Vent Technology does not have these requirements. Although both systems require air seals at the perimeter and around penetrations, the methods of accomplishing this are different. The Kelly System requires the air seals at the deck level whereas the V2T Vent Technology in general does not.

The Kelly system is an independent system supported by 2001 Company and warranties are issued from 2001 Company. The V2T Vent Technology is partnered with and supported by many of the major roof membrane manufacturers, such as Carlisle Syntec, Versico and Flex who will issue warranties to the building owner’s using the technology.

5. Technology of the Future

The fifth difference is in the added technology capabilities. The V2T Vent Technology has the capability of installing a monitoring system in the vents which are equipped with sensors that can measure and wirelessly communicate, pressure, moisture, heat, wind speed or any other parameter that could be useful on the roof, in real time.

In general we believe that the V2T Vent Technology has a significant advantage in performance, installation, monitoring, environmental stewardship and cost than any other system on the market.

To date, we have millions of square feet of roof in all climates that is providing these benefits to contractors, building owners and manufacturers across the country.

Contact us today to learn how your next project could save you an average of approximately $2 per square foot over fully adhered or mechanically fastened roofs.
Contact Us
Call Now Button